Notice: Trying to get property of non-object in /home/prontocare/public_html/wp-content/themes/medicare/functions.php on line 1148
 What is Atrial Fibrillation? – Pronto Care 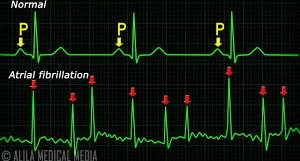 Most fascinating and most common heart rhythm abnormality encountered in the US and Globally is Atrial Fibrillation( AF). It happens where there is no organized electrical activity in the upper chambers of the heart called ( Atria) which can occur in many forms. It can happen in episodes ( called Paroxysmal AF as heart rhythm can go back and forth between the normal regular rhythm called ( Normal Sinus Rhythm or NSR) within seven days time or Persistent AF, if AF lasts more than 7 days in duration,, then Permanent AF where it is long standing and no further attempts made to restore NSR .

There are also two different classifications for AF, first is Valvular AF, which is AF related to a diseased Heart Valve such as Rheumatic Heart Disease, Mechanical Valve , Bioproshetic valve or after heart Valve repair which would require use of blood thinner called Coumadin and requires close monitoring for its narrow therapeutic range and measured by INR or International Randomized Ratio to be slandered across the Globe. Also, requires dietary restrictions from green leafy vegetables high in Vitamin K which counters Coumadin blood thinning action and has to be monitored for bleeding if blood is too thin or strokes from blood clots if level of blood thinning or INR is below the therapeutic range. For other non valvular AF, a new class of oral blood thinners have been developed and seen on TV ( being Pradaxa or Xalerto or Eliquis) where there is only one time adjustment if kidney functions are abnormal , but no frequent testing or dietary restriction like Coumadin and thus considered to be a great quality of life improvement for the majority of patients who do not have Valvular AF. All patients put on both types of blood thinners have to be watched for bleeding .

The other type of AF is Non Valvular AF and excludes heart valve disease which could in most cases due to Coronary Artery Disease, or CAD meaning blocked Coronary Arteries or Hypertensive Heart Disease due to uncontrolled Blood Pressure, increasing age as incidence of AF increases gradually with aging after 65 years and reaches to almost 10% after age of 80 years old. Less causes of AF include alcohol abuse, drug abuse or thyroid function abnormality by either hypo or hyperactive thyroid gland function which can be detected by a simple blood test. Also various infections including Pneumonia, Urinary tract infections , or inflammation of the covering membrane of the heart or after open heart surgery all usually short duration and need to treat the underlying cause to get rid of AF.

There is a wide range of presenting symptoms of AF including drums pounding, thunder rumbling or fish flopping in the throat with racing heart. Also, fatigue, shortness of breath, leg swelling , dizziness or even passing out. Symptom severity will depend on how fast the rate of AF and age of patients who do not tolerate AF with fast heart rate and get very ill rather quickly. This is explained by the fact that 40% of the effective pumping action of the heart known as forward cardiac output is lost once patient goes into AF and with fast rate usually more than 100 beats per minute, there is no time for the heart muscle to relax and get oxygen in the relaxation phase known as ( diastole), thus patient goes into rapid decompensation into Congestive Heart Failure and thus first priory becomes controlling the fast heart rate and start patient on a blood thinner to prevent devastating strokes due to blood clots forming in the upper chambers and getting showered to the brain causing embolic strokes which are largely preventable when therapy with blood thinners are initiated in a timely manner usually if new onset AF lasts more than 36 hours in those without contraindications such as bleeding problems , or dementia or unsteady gait with frequent falls with head trauma.

Obviously, there was always attempts to restore the Normal regular rhythm NSR with cardio-version either chemically with medications called Anti arrhythmic medications or by electrical shock if NSR is not restored spontaneously. Later, we learned from AFFIRM Trial that in long standing AF, it is better to control the rate of AF rather than attempting to converting AF into NSR.

Searching for a cause for AF would include testing for Coronary Artery Disease CAD, by a stress test and if abnormal , go to cardiac catheterization , also non invasive testing by 2 Decho done on the chest wall, called TransThoracic Echocardiogram( TTE) to evaluate left ventricular function or see how strong the main pumping chamber of the heart, assess the size of upper chambers( called Atria) , function of the valves and also asses any pericardial disease involving the membrane encasing the heart muscle.

Another Special form of Echocardiogram called Trans Esophageal Echocardiogram or TEE to assess for blood clots in the Left Atrial Appendage( LAA) which is a part of the upper chamber( Atria) that can not be visualized from TTE which is similar to endoscopy passing a scope after numbing the back of the mouth to have direct visualization of valves structures and integrity and chamber and LAA looking for clots which would be the source of strokes which would then be indication for blood thinner therapy.

There are clinical challenges in treating AF which include Refractory AF which refers to AF with fast heart rate can not be controlled by 2 or more medications which would indicate a procedure called ( A-V Node Ablation) which is basically burning the connecting electrical circuit between the upper and lower chamber and implantation of a permanent pace maker as a last resort to control symptoms of palpitations and refractory Congestive Heart Failure resulting from fast rate of AF.

Other indications for implantation of Permanent pace maker would include slow heart rate , or alternating fast and slow heart beats with symptoms of dizziness or passing out and in some cases , Electrophysiology study done to cases to confirm the diseased electrical system of the heart known as Sick Sinus Syndrome ( SSS) .

In other cases in patients with weak heart muscle, they get AICD , ( Automatic Implantable Cardiovertor Defibrillator )to shock patients out of AF into NSR.

Now with technology and Mobile Phone Apps and other devices advertised on TV to have patients put their fingers on a small pad and gets instant reading of the heart rhythm to see whether they are in AF or NSR and the accompanying heart rate to have patient connected to their physicians remotely and make decisions to manage patients accordingly.This technology may abort many unnecessary trips and admission to the hospital safely with rate control and anticoagualtion( using blood thinners ) to prevent blood clots and hence strokes and have a next day follow up in office rather than ER with knowing patient well and getting good data to make good clinical decisions and improve quality of life and cut down healthcare costs without compromising patient care.

This was a snap shot to AF as you must follow up with your doctor for treatment and management of AF to help prevent strokes , congestive heart failure and death. Hopefully, this will help as it is more than likely that you will come across someone with AF in your everyday life among millions of patients with AF here at home and around the world!

previousCoffee is good in Moderation!

nextCinnamon use for Diabetes