Notice: Trying to get property of non-object in /home/prontocare/public_html/wp-content/themes/medicare/functions.php on line 1148
 Fresh Approach to Depression! – Pronto Care 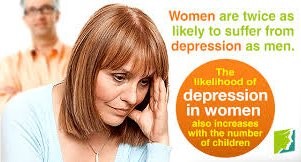 Depression is number one Disability in the US affecting 15 million Americans and 350 Millions world wide. Depression is an emotional disorder accompanied by physiological symptoms of mood disturbance, feeling sad, not enjoying life or with physical symptoms such as tiredness, sleep disturbance, weight gain, loss of energy or interest in life. Depression is caused by major stress due to loss of loved ones, divorce, serious illness, loss of job, loss of house following Hurricane, storm , flood , fire or being taken away by the bank!

Depression usually co-exist with other chronic medical problems such as chronic pain syndrome with high association with substance abuse costing up to 80-100 $ Billions with 225 Million work days lost. Depression worsen other health conditions and vice versa where other Health conditions such as heart attacks, strokes, cancers and Motor Vehicle Accidents will lead to or worsen Depression.

Depression is different from Mood swings which are abrupt rather than persistent long term sadness ( Major Depressive Disorder MDD). Women are twice more likely to have Depression than Men in various stages of Youth, adulthood and post menopausal. The latter is thought to be due to decrease in Estrogen . But Post postpartum depression occurs as well after delivery of baby or loss of one. Depression can also affect children, and Seniors, both males and females across all cultures and races globally. But noted to have higher incidence of Depression in the Western Countries such as US, Canada, France and others in Europe more than Eastern cultures such as China, Korea, Japan, Middle East which could reflect a possible contribution of culture to Depression.

Once Depression is suspected or confirmed, patients should seek professional help as if left untreated , may progress to Suicidal thoughts or even attempted suicide and there are so many daily examples who showed alarming signs of Depression which were ignored and culminated to tragic events. It is estimated about 45% of people with Depression do not get treated due to failure of symptom recognition. This happens in all professions in society and particularly Veterans with Post Traumatic Stress Disorder( PTSD), Celebrities, Medical Students and even physicians just to name a few.

It starts with stress that builds up going into ( Burnout) and state of sadness, hopelessness then progresses to Suicide. That is why it is so important to have early recognition and early intervention to prevent things from escalating and getting worse.

There is good news as new effective oral medications to treat Depression such as Ketamine showed promising results especially with the 1/3 of patients who do not respond to Anti-Depression Medications. This should be part of a comprehensive approach to the patient , not just the chemical solution by giving a pill and expect miracles. We all know that US constitute 3% of the world population , but consume almost 95% of the world Psychotropic medications, which means, so many people are way over medicated which could have many negative effects and hurt patients rather than helping them by adverse interactions with many other medications ( known as Poly-Pharmacy) which in the Era of e-Prescribing should be minimized or eliminated to give patients the least number of effective medications to avoid majority of adverse events related to medication intake.

Patients should discuss with their Primary Care Physicians as well as Psychologists and Psychiatrists choices of Anti depressant therapy after complete review of their medical history and exam along with full review of their other regular medications to ensure patient safety and efficacy . For example a class of medications called ( Selective Serotonin Uptake Inhibitors or SSRIs ) work by inhibiting breakdown of Serotonin in the brain as Serotonin is responsible for the Mood ( such as Prozac or Celexa), Other types Medications called Tricyclic Anti- depressants. Giving oral Estrogen only pills for post menopausal depression has been associated with increased risk of developing Thrombotic disease( blood clots) such as Deep Venous thrombosis (DVT) or Pulmonary Embolism (PE) which could be fatal. But ok to have topical Estrogen to avoid dryness or low dose Estrogen/Progesterone pills. No Estrogen should be given for those with history of Breast Cancer, Uterine or Ovarian cancer or prior liver disease or prior hx of DVTs or PEs . Also, Paxil works fairly well in post menopausal women with symptoms of post menopausal Depression.

Certain foods would also help such as nuts, seeds, yogurt, salmon, grains and dark chocolate. Social support is important to the point that some studies showed better outcome for patients who are living with a spouse or Pets rather than those living alone with higher mortality following Heart attack and Open Heart Surgery due to higher incidence of Depression and inactivity. Psychotherapy helps patients cope with various life problems(by improving self -esteem, promote positive behavior and belief( Inter-personal therapy or Cognitive Therapy)  .

Bottom line, Depression can not be ignored anywhere because it is everywhere. On the job,with family or friends, once suspected or confirmed, it is critical especially if symptoms persist to get professional help with early intervention before patient start to express suicidal thoughts or behavior. Stress Management is a part of our Health and Wellness strategy through patient education and empowerment. Together, we can save so many lives. Show that you care and give much needed help and hope here at home and around the Globe!

nextCoffee is good in Moderation!